Trump, Putin Spoke by Phone for an Hour 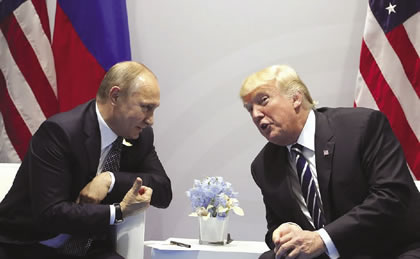 According to the White House readout, the two Presidents

"affirmed their support for the Joint Statement of the United States and the Russian Federation, issued at the Asia-Pacific Economic Cooperation Summit on November 11. Both presidents also stressed the importance of implementing UN Security Council Resolution 2254, and supporting the UN-led Geneva Process to peacefully resolve the Syrian civil war, end the humanitarian crisis, allow displaced Syrians to return home, and ensure the stability of a unified Syria free of malign intervention and terrorist safe havens."

They also affirmed the importance of cooperation in fighting terrorism throughout the Middle East and Central Asia, how to implement a lasting peace in Ukraine, and the need to continue international pressure on North Korea to halt its nuclear weapon and missile programs.

The Kremlin, reports TASS, said that the two Presidents discussed the pressing aspects of the Syrian problem with accounts of the completing military operation against terrorists in Syria.

"Putin stressed readiness to facilitate a durable political settlement process in Syria on the basis of the UN Security Council’s Resolution 2254 in the spirit of agreements reached in the Astana format and provisions of the Joint Statement the two Presidents endorsed on November 11 at the APEC summit in Vietnam,"

the report said. "The sides stated among other things that the statement had produced an encouraging reaction in the Middle East," it said. Putin, reports Sputnik, also informed Trump about the results of his recent meeting with Assad, during which the Syrian leader reaffirmed his commitment to the political process, constitutional reform, as well as to hold presidential and parliamentary elections.

"also exchanged opinions on the situation on the Korean Peninsula, stressing the expedience of search for the settlement of the problem through negotiations, diplomatically,"

EIR Seminar: Who's Trying To Destroy The Presidency And Start A World War With Russia 9/9/2017 NYC