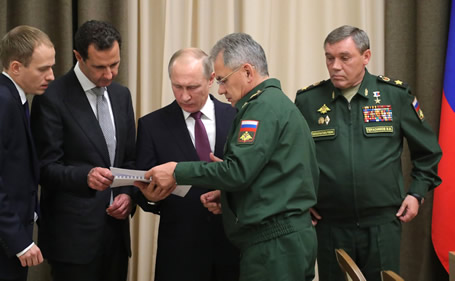 Source: kremlin.ru, licensed under Creative Commons Attribution 4.0 International
Syria's President Bashar al-Assad (second from left) meets with Russia's President Vladimir Putin (3rd from left) and the leadership of the Ministry of Defense and the General Staff of the Armed Forces of the Russian Federation on November 20, 2017 in Sochi. See the video.

Nov. 21, 2017 (EIRNS)—History is being written in Sochi, where Russian President Vladimir Putin held an unannounced meeting with Syrian President Bashar al Assad on Nov. 20 and then introduced him to the Russian military leadership who "helped save Syria." Today Putin briefed President Donald Trump about his discusspons with Assad. Tomorrow Putin will chair the Astana Talks with the other two guarantor countries, Iran and Turkey, and will consult with Assad during the course of the talks. Putin yesterday also spoke by phone with the Emir of Qatar.

The focus of the Putin-Assad exchange was that the victory against ISIS was the star of a political process to bring peace and reconciliation to Syria. The Kremlin posted long excerpts of the exchanges between the two leaders, which give a sense of the historical importance of the talks. Excerpts of those exchanges follow:

"Welcome to Sochi. First, let me congratulate you on Syria’s results in combatting terrorist groups as well as on the fact that the Syrian people, despite a very difficult ordeal, are gradually moving towards the final and inevitable defeat of the terrorists. 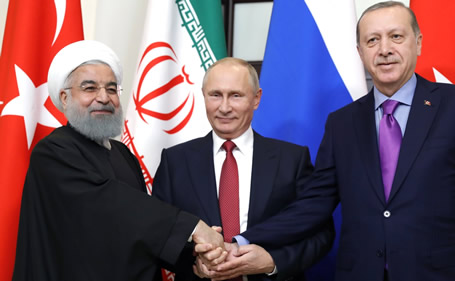 "Mr. President, as you know, I will meet with my colleagues—the Presidents of Turkey and Iran—here in Sochi the day after tomorrow. We have agreed to hold additional consultations with you during our meeting. Of course, the main subject on the agenda is a peaceful and lasting political settlement in Syria after the routing of the terrorists.

"As you know, in addition to the partners I have mentioned we are also working closely together with other countries, such as Iraq, the United States, Egypt, Saudi Arabia and Jordan. We maintain constant contact with these partners.

"I would like to talk with you about the basic principles of the political process and the Syrian National Dialogue Congress, the idea of which you have supported. I would like to hear your opinions on the current situation and development prospects and your views on the political process, which should ultimately be implemented under the UN auspices. We also hope that the UN will join the [political] process at its final stage."

"Over this period, we have achieved major success both on the battlefield and on the political track. Many regions in Syria have been liberated from the terrorists, and the Syrians who had to flee from these regions can now return there.

"It should be acknowledged that the operation brought progress to the political settlement in Syria. And the process which was started and which Russia promoted with various efforts continues, above all, based on respect for the UN Charter, the state’s sovereignty and independence. This stance has been defended at various international platforms, including the talks in Astana. The same goes for the plans to hold the Syrian National Dialogue Conference in a few days. Today we have an excellent opportunity to discuss both the upcoming conference and the upcoming summit, and to coordinate our views on the next steps. 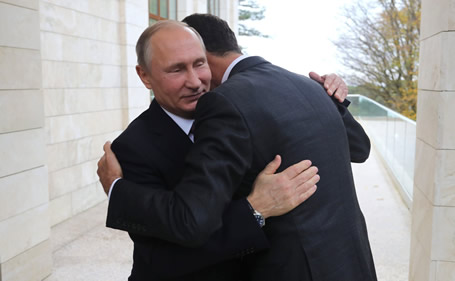 Putin responded by remarking that thanks to the Astana talks, de-escalation zones could be built and preconditions for the political process were laid.

Putin said he is "glad that you are ready to work with anyone who wants peace and conflict resolution."

EIR Seminar: Who's Trying To Destroy The Presidency And Start A World War With Russia 9/9/2017 NYC