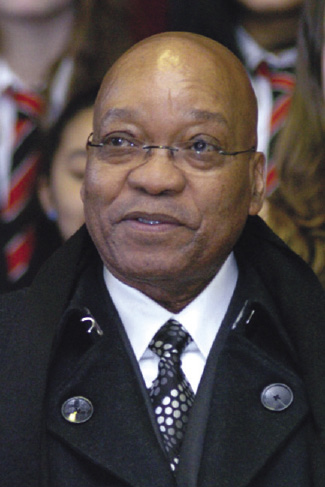 Sept. 26, 2017 (EIRNS)—In a sharp departure from his mild speech to the UN General Assembly last year, South African President Jacob Zuma’s assertive address to that body on Sept. 20 included a denunciation, in detail, of regime change as a threat to world peace and development. It seems clear that his message was directed especially to U.S. President Donald Trump.

He said in part:

“In 2011, the African Union called for dialogue to resolve the crisis in Libya. Unfortunately, some among us here opted for guns and bombs. Today those countries are making little effort to promote stability in Libya. The major focus and preoccupation has become how to deal with the flow of migrants arriving in Europe from our continent and the Middle East, which are just mere symptoms.

“The war in Libya contributed a great deal to the destabilization of the Sahel region and all the way to Central Africa, creating a corridor for illicit trafficking in arms as well as terrorist activities.

“In fact, had our warning been heeded, that the supply of arms to civilians in Libya and the arming of civilians in Syria would cause loss of life, great instability, and mayhem, the world would be more peaceful today.

“South Africa continues to call for an immediate end to the violence and for a Syrian-led political transition and a negotiated settlement reflecting the will of the Syrian people.

“In both instances of Libya and Syria, we strongly cautioned against seeking to resolve internal challenges of sovereign states by imposing foreign solutions through military means.”

Regarding North Korea, he said:

“We continue with our call for calm in the Korean Peninsula. The situation cannot be allowed to get out of hand.... It can no longer be acceptable that some few countries keep arsenals and stockpiles of nuclear weapons as part of their strategic defense and security doctrine, while expecting others to remain at their mercy.”

Such statesmanship was all too much for Huffington Post South Africa, which attempted to suppress Zuma’s remarks by means of fake news. The Huffington Post story, posted on Sept. 21, is titled, “You Need To Read Jacob Zuma’s Full UN Speech”—but the text that follows is from his speech last year! Huffington Post was contacted about the error, but so far has not issued a correction.

The BRICS Summit: Half of Humanity Launches a New World Economic Order (2014)

The Case of Africa: Who Is British Imperialism?

Tsokolibane: 'These Are the Principles that Must Define the Policy of a New Trump Administration'

To Remember Mandela: Time to Realise His Vision for All Mankind