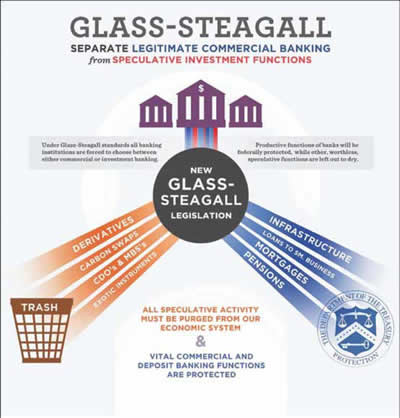 "We need to reinstate Glass-Steagall. I voted to repeal it, and see how that mistake has accumulated over the years. We need many more Republicans to join in—we can’t do it without you. Both parties have it in their platforms."

The discussion was moderated by Public Citizen’s Bart Naylor; panelists included Marcus Stanley of Americans for Financial Reform, Heather Corzo from the AFL-CIO, Nomi Prins, author of six books on Wall Street finance, and Ohio Congressional candidate Mayo Makinde from "Our Revolution," the successor organization to the Bernie Sanders campaign.

Public Citizen, Americans for Financial Reform, and Our Revolution co-sponsored the event, and the AFL-CIO hosted it. The drive includes legislative packets for local activists who will collect signatures for presentation to elected representatives as a direct democracy initiative. All members of the panel repeatedly urged listeners to call their congressmen to sponsor the legislation.

"It was nine years ago this month that the crash occurred, and we were told that the financial institutions were ’Too Big To Fail,’ and we had to bail them out. How did the repeal of Glass-Steagall figure in the crash that impacted the U.S., and the whole world economy?"

Credit default obligations, or CDOs, sold as "the gold standard," lost 65% of their value over four years. The banks used their influence to deceive the public about the bubble, Stanley said.

Nomi Prins cited "multiple bubbles" that exist today, including ABS (asset-backed securities) and the CDO market. The repeal of Glass-Steagall enabled Wall Street to chop securities into pieces, and control the knowledge of where the money was going.

Marcus Stanley said it was not an accident that the crisis occurred so soon after Glass-Steagall’s repeal. The Volcker rule was not enough; it allowed the banks to continue market-making. He said that there is a Glass-Steagall influence on Trump, but yet he appointed Gary Cohn, who came up with these instruments based on toxic assets, as his chief economic adviser.

The circumstances that led to the passage of Glass-Steagall have recurred, after a near decade of deregulation, was the panel’s consensus.

During the webinar, a "chat" of about ten words or fewer was shown periodically on the screen as the panelists spoke, including from Karel Vereycken and Dianne Bettag of the LaRouche movement, with such comments as "Now is the time for LaRouche’s 4 Laws."

No information available as yet on whether the webinar will be rebroadcast.

Restore the Glass-Steagall Banking Act of 1933