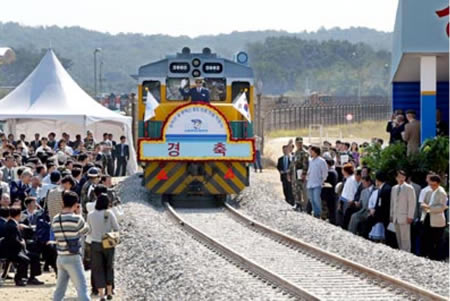 At 11 a.m. on September 18, 2002, North and South Korea cut open the Demilitarized Zone (DMZ) barbed-wire fences which had divided them for 50 years, in a ground-breaking ceremony to rebuild the “Iron Silk Road”—the trans-Korean rail and road links that had been severed since the Korean War

A PDF version of this article is in the September 8, 2017 issue of Executive Intelligence Review and is re-published here with permission.

Sept. 4—As the world fearfully watches the powerful North Korean nuclear weapon test, and threats of war from the United States, Lyndon LaRouche reminded the world that it was the sabotage of his “peace through development” policy, first by George Bush and Dick Cheney, and then by Obama, which caused the current crisis. The “Agreed Framework” of 1994 under Bill Clinton was working to end North Korea’s nuclear weapons program, with IAEA inspectors on the ground, in exchange for economic cooperation—when Bush and Cheney scrapped it in favor of military threats and confrontation.

Again in 2002, when South Korean President Kim Dae-jung proceeded, with backing for his “Sunshine Policy” from Russia and China, to reopen economic cooperation with the North, Bush and then Obama rejected cooperation, while blaming North Korea for “cheating.”

The fact is, the British and their neocon cohorts in the United States do not want a solution, since the crisis in Korea justifies their effort to target China, economically and militarily. Indeed, that is made clear today by the response from Washington to the perceived threat from Pyongyang.

The incompetent U.S. Ambassador to the United Nations, Nikki Haley, told today’s emergency meeting of the U.N. Security Council that North Korean leader Kim Jong Un is “begging for war,” saying that the United States is preparing a draft resolution to be voted on next week, in which “The United States will look at every country that does business with North Korea, as a country that is giving aid to their reckless and dangerous nuclear intentions”—i.e., the target is China, as well as Russia.

Treasury Secretary Steven Mnuchin, the Wall Street asset within the Trump Administration, told Fox News on Sunday that he was working on sanctions such that “Anybody that wants to do trade or business with [North Korea] would be prevented from doing trade or business with us.” Presumably he’s talking about locking certain Chinese banks and companies out of the U.S. financial system—which is crazy.

This makes it clear that the target is also Trump himself; namely, his efforts to build a working friendship between the United States and both China and Russia, which is the cause of the ongoing “color-revolution” against him by traitors in both parties.

Trump himself tweeted that China is “trying to help but with little success,” and accused South Korea of “appeasement” for wanting to engage the North in any way. Gen. Mattis issued a statement saying: “Any threat to the United States, or its territories—including Guam or our allies—will be met with a massive military response, a response both effective and overwhelming.”

On the other hand, South Korean President Moon Jae-in’s office issued a statement saying: “Korea is a country that experienced a fratricidal war. The destruction of war should not be repeated in this land.” Moon has stated clearly that President Trump has assured him that there will be no military action against the North without Seoul’s approval. Nonetheless, the Moon government is speeding up the deployment of THAAD missiles in his country (despite strong opposition from China and Russia) and is discussing with Washington the deployment of U.S. strategic military assets in South Korea, including a nuclear-powered aircraft carrier and strategic bombers.

Both China and Russia strongly condemned the North Korean nuclear test, but made clear that Washington’s refusal to talk to Pyongyang, or to curtail their military exercises threatening the North, are equally responsible for the crisis. “My personal opinion is that there would have been no conflict at all if the United States stopped maintaining the conflict,” Russian Deputy Prime Minister and Presidential Envoy for the Far East Yury Trutnev told Tass. “Every time North and South Korea seem about to come to terms, and tensions start to ease, some naval drills immediately begin, even stipulating a training plan aimed at seizing Pyongyang, which is a direct provocation,” Trutnev said.

Chinese Foreign Ministry spokesman Geng Shuang told reporters Monday that North Korea must be very clear that U.N. Security Council resolutions prohibit such activities. But Geng also took exception to the threats against China. He said that China regarded as “unacceptable a situation in which on the one hand we work to resolve this issue peacefully, but on the other hand our own interests are subject to sanctions and jeopardized. This is neither objective nor fair.”

There is no doubt that DPRK’s action . . . is a gross violation of relevant U.N. Security Council resolutions and has raised serious concerns in the region and worldwide. But Trump is not helping the situation with tweets blasting the DPRK and criticizing South Korea and China.”

The editorial goes on to argue that :

the fundamental failure of Trump’s strategy is that it pins too much hope on tightening sanctions, a strategy that has proved a failure for decades.” The editorial further argues that “If Trump is right in saying China ‘is trying to help but with little success,’ it is because the United States has not heeded China’s advice, such as resuming the Six-Party Talks, direct contacts between the United States and the DPRK, and accepting ’dual suspension,’ in which the United States and South Korea halt their military drills and the DPRK suspends its nuclear tests.

Putin, Xi Jinping, Abe, Moon, and others will be meeting each other this week, some at the ongoing BRICS meeting in Xiamen, and then at the Eastern Economic Forum in Vladivostok, where Korea will be high on the agenda.

Why Is Korea Not Reunified Already? (EIR PDF)

HELGA ZEPP-LAROUCHE: If Trump, Putin and Xi Work Together, the World Can Move Away from the Abyss and Towards a New Paradigm