Bailout Has Again Put Greece
on Road to Bankruptcy 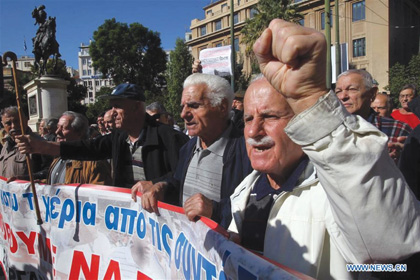 Xinhua
Thousands of Greek retirees rally in central Athens, against the fresh round of pension cuts implemented by the government under bailout agreements.

Nov. 8, 2017 (EIRNS)—The infamous bailout of Greece to save the European financial system, is pushing Greece into another bankruptcy unless the debt is cut considerably, was the assessment of the Greek Parliament’s State Budget Office (PBO), which made its report public on Nov. 6.

The report warns that after 2020, interest payments on Greece debt will increase dramatically, requiring EU84.3 billion in the six years from 2021 to 2026 for interest payments alone, according to data from the Public Debt Management Agency.

"Without a serious lightening of the debt, Greece will be bankrupt," warned Prof. Panagiotis Liargovas, director of the PBO. He also called for suspending the insane requirement for Greece to maintain high primary budget surpluses, because they are "asphyxiating the economy, generating a vicious cycle of recession."

According to the Greek daily Kathimerini, the report also called for revamping the high tax policy, which has all but collapsed growth. The report stated that

"the tax policy implemented in recent years, based on the increase in taxation, is hampering growth in the country. The continuation of the tax-centered policy increases the economy’s suffocation, while on a practical level a large part of the taxes are not collected."

It further notes that

"the distribution of the tax burden among citizens is not balanced, with a large section of taxpayers paying minimum taxes—which highlights the high rate of tax evasion and the high rate of poverty—and relatively high incomes being taxed excessively, creating counterincentives for labor."

Greek Finance Minister Euclid Tsakalotos later challenged the PBO assessment, claiming that it was based on information from 2014. PBO admitted it did not have available any more recent data, but maintained that this did not change the substance of its assessments. The PBO declared,

"We accept the criticism leveled at the assessments of our latest report, but that does not change the essence of PBO’s point of view, which is that if there are no resulting long-term relief measures and regulations that can free the Greek state from the traps of high debt, the viability of the loan will be threatened long-term, or even prove impossible."

A Greek Proposal: Convene a European Debt Conference for 2015

Greek Government Is Right: The Debt Is a Swindle

Restore the Glass-Steagall Banking Act of 1933