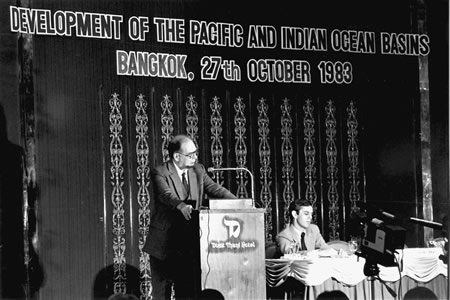 Sept. 11, 2017 (EIRNS)—Early press accounts of the Kra Canal Conference held in Bangkok today, show that it was a huge success, demonstrating the broad base of support, both within Thailand and internationally, to proceed with this project, which has been supported by EIR and Lyndon LaRouche since the 1970s as part of the "Great Projects" approach to world peace and development.

Articles in the Japanese Nikkei and the Malaysian state news service Bernama report on the enthusiasm of the participants. A direct report from EIR’s associate Pakdee Tanapura, a leading organizer of the conference, will follow.

Nikkei writes: "European business leaders in Thailand have joined Chinese government advisers and influential Thais in urging the country’s military junta to construct a $28 billion ship canal through the narrow Isthmus of Kra to link the Indian and Pacific Oceans."

They report that Rolf-Dieter Daniel, president of the European Association for Business and Commerce, the umbrella group of European chambers of commerce in Thailand, strongly promoted the project. "We believe the project should have a very high priority for the government," he told the conference. He said the Kra Canal (now being called the Thai Canal) "would be one of the most ambitious and transformational infrastructure projects ever contemplated in Asia." He added that "financially, this project shall not be a problem and will not burden the Thai taxpayer. Therefore, we can only recommend the Thai government to issue a current feasibility study as soon as possible."

Nikkei reports that diplomats and officials from Japan, China, the United States, Singapore, Malaysia, and the European Union, among others, attended the event, co-sponsored by the King Mongkut’s Institute of Technology Ladkrabang, the Thai Canal Association for Study and Development, and the Thai-Chinese Culture and Economy Association of Thailand.

General Pongthep Thesprateep, a former army chief of staff who heads the Thai Canal Association, opened the conference with a call for the government to pick up the project as soon as possible.

"Today marks a very important day in the history of Thailand," Pongthep said. "I hope that the result of this conference will act as a catalyst for the Thai government to create a national committee for the complete feasibility study of the Thai canal project. The study should provide answers to any doubts that may still exist."

A former Supreme Commander of the armed forces, General Saiyud Kerdphol, who was a speaker at the conference in 1984 with Mr. LaRouche, sent a long message of support in which he called for the canal to be made a project of the Thai monarchy—"a King’s Project"—to avoid it becoming bogged down in politics. according to Nikkei. Prof. Zhou Dawei from Peking University, told the audience that "The Thai Canal, will make Thailand a true transport hub in the world." He added: "We strongly believe that under the OBOR initiative, if we give more importance to the Kra Isthmus Canal project, we will definitely be part of a great change in humankind’s history."

Prof. Jingsong Song from Shanghai Jiao Tong University said, "Thailand should take advantage of China’s position now and start the Kra Canal project. Don’t delay the project, now is the right time." The Thai Canal, said Song, would not only propel Thailand’s economic ambition but also the Asian and the world’s economies, according to Bernama.

The LaRouche Record: The 40 Year Fight for a New, Just, International Economic Order

Changing the World with the Kra Canal Video of conference presentation, Apr. 7, 2017 NYC