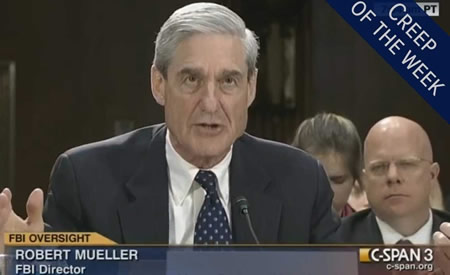 Sept. 11, 2017 (EIRNS)—On the 16th anniversary of the 9/11 attack on the United States, we are reminded that the FBI and intelligence agencies leading the coup attempt today against President Trump, are the same people and agencies responsible for allowing the 9/11 attack to take place, and doing everything in their power to cover up the role of the Kingdom of Saudi Arabia in the attack.

"Think about this for a moment: the man now in charge of investigating the President of these United States for collusion with Russia and possible obstruction of justice, himself obstructed a congressional investigation into the 9/11 terrorist attacks," Antiwar.com Editorial Director Justin Raimondo wrote today.

There is a great deal the American people still do not know about how the attack occurred, but after much agitation, we do know that Saudi Arabia played a key role in the attack, but, "we wouldn’t know anything about this part of the 9/11 plot if Robert Mueller—then FBI director ... had had his way," Raimondo wrote.

On that, he cites Andrew Cockburn’s explosive report on Mueller’s personal efforts to block the Congressional Inquiry, included in Cockburn’s lengthy review of the fight to bring out the truth, published by Harper’s today.

Cockburn recounts the story of how former FBI lawyer and counterterrorism analyst Michael Jacobson, working for the Joint Congressional Inquiry into 9/11, came across a reference to an FBI informant in San Diego who knew one of the hijackers. Bob Graham, head of the Senate Intelligence Committee and co-chair of Joint Inquiry, "told me recently that Robert Mueller, then the FBI director ... made the strongest objections to Jacobson and his colleagues visiting San Diego" to follow up the lead, Cockburn reports.

"Understandably, the investigators had a lot of questions for this man. Nevertheless, Mueller adamantly refused their demands to interview him, even when backed by a congressional subpoena, and removed Shaikh to an undisclosed location for his own safety. Today, Graham believes that Mueller was acting under orders from the White House."

"So many lies! So much official obstruction! Now, however, the truth is finally coming out. With the passage of legislation stripping the Saudis of their sovereign immunity—over President Obama’s veto—the class action suit against the Saudis is moving forward. Armed with thousands of pages of documents showing how Riyadh and its global network of Islamic extremists have succored, aided, and directed al-Qaeda and allied organizations in terrorist attacks against U.S. citizens and interests, the families of those killed, wounded, and traumatized on September 11, 2001, are about to get their day in court.

"And what is bound to come out is the complicity of U.S. officials in the cover-up. It looks to me like Robert Mueller’s time in the spotlight is about to get a lot more interesting."

The Foreign Power Corrupting U.S. Politics Is London, not Moscow by Helga Zepp-LaRouche