"German Expert: 'Belt and Road' Initiative Is a Recipe for Peace" 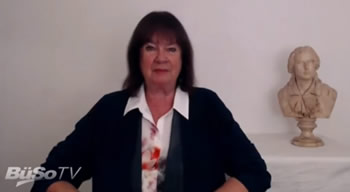 "Many of today's world crises have their roots in the lack of economic development. Economic development is today a new synonym for peace, and the Chinese `Belt and Road' initiative offers them development," Mrs. LaRouche said during an interview with Xinhua.

She noted that the initiative proposed by the Chinese government, seen in the large, makes the interest of mankind as a whole the priority, before national and regional interests. She said that if leading world forces like Russia and Germany are able to actively join these efforts, this will solve many of the existing problems.

"It is a recipe for peace, development, and the overcoming of poverty," she said.

According to the statistics, China's direct investments into countries along the "Belt and Road" initiative have amounted to more than $60 billion over the past four years, while Chinese businesses have set up 56 economic and trade cooperation zones in over 20 countries, which have generated almost $1.1 billion in tax-receipts and created 180,000 workplaces.

The Schiller Institute, an international "bank" for political and economic ideas headquartered in Germany, has published a report which describes the New Silk Road as a land-bridge, while forecasting that the Chinese initiative would have no limits, and might tie all five continents together, and allow them to cooperate in a "win-win" perspective, Mrs. LaRouche said.

Discussing the upcoming parliamentary elections in Germany on Sept. 24, Mrs. LaRouche said that the competing parties, like the Christian Democratic Union (CDU), led by Chancellor Angela Merkel, and the Social Democratic Party (SPD), led by former European Parliament President Martin Schulz, had not made their views clear on prospective cooperation with China. Mrs. LaRouche, who leads a smaller party called Civil Rights Movement Solidarity, (Bürgerrechtsbewegung Solidarität, BüSo), called on the incoming German political establishment to engage itself further in the "Belt and Road" initiative.

Although the election results "are fairly clear and Merkel will probably be re-elected as Chancellor," Mrs. LaRouche suggested that the new government should focus more on what China has offered and is offering.

"The Eastern European countries, the Balkans, Italy, Spain, Switzerland and Austria are already acting with more enthusiasm than the current German government.... People will recognize that cooperation with China is in their fundamental interest, especially in industry," she said. http://german.xinhuanet.com/2017-09/18/c_136618053.htm

A New Strategic Alliance: Cooperation Among Sovereign Nations--United States, Russia and China Versus the British Empire