Friedrich Schiller, Confucius, and the Spirit of the New Silk Road 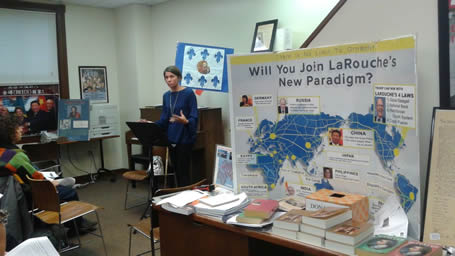 Rachel Brown performs Joan of Arc from Friedrich Schiller's The Virgin of Orleans.

A Boston celebration of the 258th birthday of the “Poet of Freedom” on November 18 demonstrated the principles upon which Helga Zepp-LaRouche founded the Schiller Institute, and radiated “The Spirit of the New Silk Road” among the 37 assembled LaRouche activists, chorus members, musician collaborators, guests, and beyond. 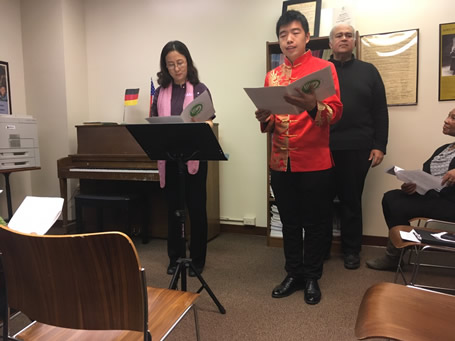 Dr. Lu (left) and Mr. Zhong from the Confucius Institute and Bill Ferguson read The Proverbs of Confucius.

The program, which was composed around the universal genius of Confucius and Schiller, and those whom they have inspired, began with a musical “Happy Birthday,” John Sigerson’s choral arrangement of “An die Freude”, from Beethoven’s Ninth Symphony, followed by presentations of Schiller’s “Kolumbus”, and the Will Wertz translation.

Two representatives from the Confucius Institute Boston, Dr Z. Lu and Mr. M. Zhong, chose a perfect contribution for this occasion. After “Sprüche des Konfuzius” was presented by Bill Ferguson, the visiting scholars from Renmin University read alternating translations in Mandarin and in English. Their participation had been arranged by the director of the Confucius Institute Boston, who expressed joy at President Trump’s Beijing “state visit plus-plus,” saying “this is the result of the hard work of the Schiller Institute.” 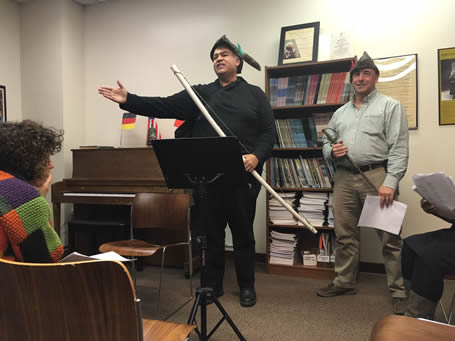 After Jenny Burns read Mariana Wertz’s translation of “Dignity of Women,” the gathering was graced with a powerful performance by Rachel Brown, from the prologue of “The Virgin of Orleans,” where Johanna leaves her flock, takes the helm, and adopts the divine mission to lead her countrymen in battle to drive the foreign invader from her beloved homeland. Several guests in the audience were visibly moved, and later commented on its “surprising” effect on them, including some who may be beginning to realize that they will benefit even more from aesthetical education than mere political discussion. Following this, “Nein, eine Grenze hat Tyrannenmacht...(No, There’s a limit to the tyrant’s power…)” and “Der Rütlischwur,” from Wilhelm Tell, Schiller’s dramatic translation of the Declaration of Independence, then a reading of the original Declaration by Kevin Pearl.

Further musical offerings were prefaced with an excerpt from a treatise on music by Confucius, on the vital necessity of music in statecraft and personal development, which could have been written by Schiller, which concludes: “Therefore, the superior man tries to create harmony in the human heart, by a rediscovery of human nature, and tries to promote music as a means to the perfection of human culture. When such music prevails, and the people's minds are led towards the right ideals and aspirations, we may see the appearance of a great nation. Character is the backbone of our human nature, and music is the flowering of character.” 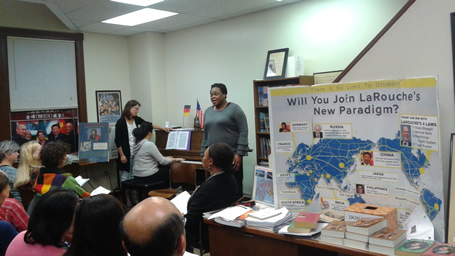 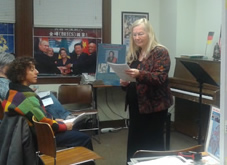 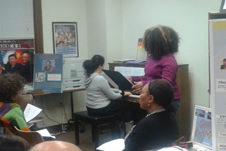 Mistress of Ceremonies Cloret Ferguson read from Zepp-LaRouche’s message, “Why the Schiller Institute? On the Aesthetical Education of Confucius and Schiller,” then introduced two recorded offerings: first, a recording of a Polish patriotic hymn “Boże Coś Polskę  (God Thou Hast Poland)” by the host of a local cable TV program who had interviewed Jennifer Pearl to promote the Tribute concert; second, a warm message of greeting from Ramasimong Phillip Tsokolibane of  LaRouche South Africa, in his native language Sesotho, which concludes with a description of the development of a “beautiful soul,” from the Analects of Confucius, Book II, verse 4: “The Master said, At fifteen I set my heart upon learning. At thirty, I had planted my feet firm upon the ground. At forty, I no longer suffered from perplexities. At fifty, I knew what were the biddings of  Heaven. At sixty, I heard them with docile ear. At seventy, I could follow the dictates of my own heart; for what I desired no longer overstepped the boundaries of right.” 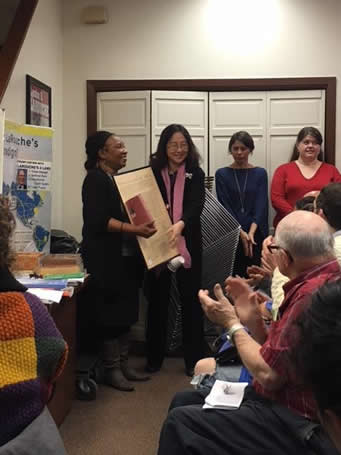 Cloret Ferguson presents Dr. Lu of the Confucius Institute with a framed copy of the 1984 Declaration of the Unalienable Rights of All Mankind and a copy of  Friedrich Schiller: Poet of Freedom, Volume II.

Next Jen Pearl presented a review of the history of the Schiller Institute’s 34-year campaign for a Just New World Economic Order, and to revive Classical culture. She presented a very clear Feinbild, as to who would actually be opposed to these ideas, quoting the evil Bertrand Russell on the usefulness of methods of menticide, to “instill the “unshakeable conviction that snow is black.” She described the degenerate paradigm shift that was created by Russell and his ilk after the death of  Franklin Roosevelt through to the assassinations of the Kennedys and Martin Luther King Jr., to prevent the emergence of a such a just world order, employing such operations as the CIA-sponsored Congress of Cultural Freedom, which attacked anyone who represented a principle of truth, classical beauty, actual creativity, as an “authoritarian personality,” and which has manufactured a culture where truth is replaced by “the narrative” and “political correctness.”

Against this stood Lyndon LaRouche, representing continuity with the FDR perspective of postwar world development. His economic ideas were taking root in the 80’s, as indicated by his personal meetings with President Jose Lopez-Portillo in Mexico, Prime Minister Indira Gandhi in India, and leaders in Argentina. President Reagan adopted LaRouche’s new strategic policy, which became known as the SDI; this is why he was unjustly prosecuted and imprisoned, to stop his influence among world leaders.

During his incarceration, after the fall of the Berlin Wall, the Eurasian Landbridge  proposal was taken up by China, later advanced by Helga’s numerous organizing trips there,  and he gained a significant following in Russia, where he made several important tours after his release. Through the work of the LaRouches, and the leadership in China, Russia, and other Belt and Road nations, a New Paradigm of progress, development and peace is emerging, and taking over the world.

The formal program concluded with a presentation by Bill Ferguson, “The Spirit of the New Silk Road.”

To illustrate this “Spirit” he referred to the reminiscences of three young future world leaders:

Lyn’s recollection, in his autobiography (The Power of Reason:1988), from his days as a soldier in 1946  Calcutta, his encounter with a group of coolies, to whom he said that the United States should export textile machinery to India after it gains independence from the British, and how this commitment to the development of poorer nations has been central to all of his political activity ever since;

Helga’s world tour of 1971, and her adoption of the mission to change the world for the better, as recounted in the August China Daily interview;

An excerpt from a speech President Xi gave in Seattle in 2015, where he talks of the seven years beginning in the late 1960’s when was sent from Beijing to work as a peasant in a poor village, where the people lived in caves, slept on earth beds, and had no meat for months. Later as village party secretary one of his wishes was that the villagers could have as much meat as they desired. Then in 2015 he returned to the village, where now people live in brick houses, have black top roads, medical care, internet access, school for children, and meat.

“What has happened in [my village] is but a microcosm of the progress China has made through reform and opening up. In a little more than three decades, we have turned China into the world’s second-largest economy, lifted 1.3 billion people from a life of chronic shortage, and brought them initial prosperity and unprecedented rights and dignity.”

“This is not only a great change in the lives of the Chinese people, but also a huge step forward in human civilization, and China’s major contribution to world peace and development…”

Ferguson contrasted the amazing progress and transformation of China, which implemented the New Silk Road idea, to the economic collapse, wars, genocide, and other disasters in and from the West, where it was rejected. He gave a brief report on the potential of this all changing, through the US joining in the New Silk Road, because of the Trump visit to China, and the warm personal collaborative relationship developing between President Xi and President Trump. 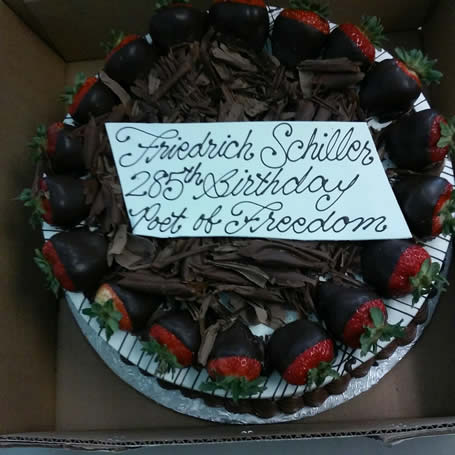 He ended the presentation with a recitation of “Hoffnung” and “Hope” and then the video of Trump’s young granddaughter Arabella Kushner’s gift of Chinese music and verse to “Grandpa Xi and Grandma Peng,” another beautiful poetic message of hope, which of course which provoked delighted smiles, laughter, and loud applause. (A Chinese-American woman who attended the event reports that the teachers and children of her daughter’s Chinese class were excited about this video, and have been inspired to learn those songs and poems).

After this, the participants enjoyed a massive Poet of Freedom Friedrich Schiller Birthday Cake, donated by a local German bakery, as they discussed ideas and plans to further propagate the Spirit of the New Silk Road.

Books and Video on Schiller

Poetry and Agape - Reflections on Schiller and Goethe by Helga Zepp-LaRouche, 1988